A quick foreword, the following application is for security and threat management. The faces and names used in the images below were sourced from Unsplash and open-source libraries. All names were generated with randomizer tools in Sketch.

Any likeness to a real people is coincidental and unintentional - none of the people represented in these designs are in a threat database (to my knowledge).

I was a Senior UX Designer at Coolfire Solutions which was part agency part SaaS startup. One agency project we worked on was called Redlyst. The app leveraged Coolfire's Ronin platform to manage Persons of Interest (POI) data for private security. The goals were to reduce response times to threats, increase situational awareness, and automate tracking and alerts for suspicious activity.

As the lead product designer I worked closely with Coolfire's Principle Software Architect to design the POI management tool. It was split into two applications: a web-based command center and a mobile app for the field. The web app was used to manage the POI data and create rules and filters for the system. The mobile app was used by field agents responding to threats or activity.

Most of the process involved hearing war stories from the security personnel and how they do their jobs. Then we'd workshop ideas and rapidly prototype a solution in Sketch, or in the app. Biv, the Software Architect, was a wizard with Swift and could crank out functional improvements to the app in a few hours. He'd demo the app and get more feedback, then we'd continue iterating the designs. 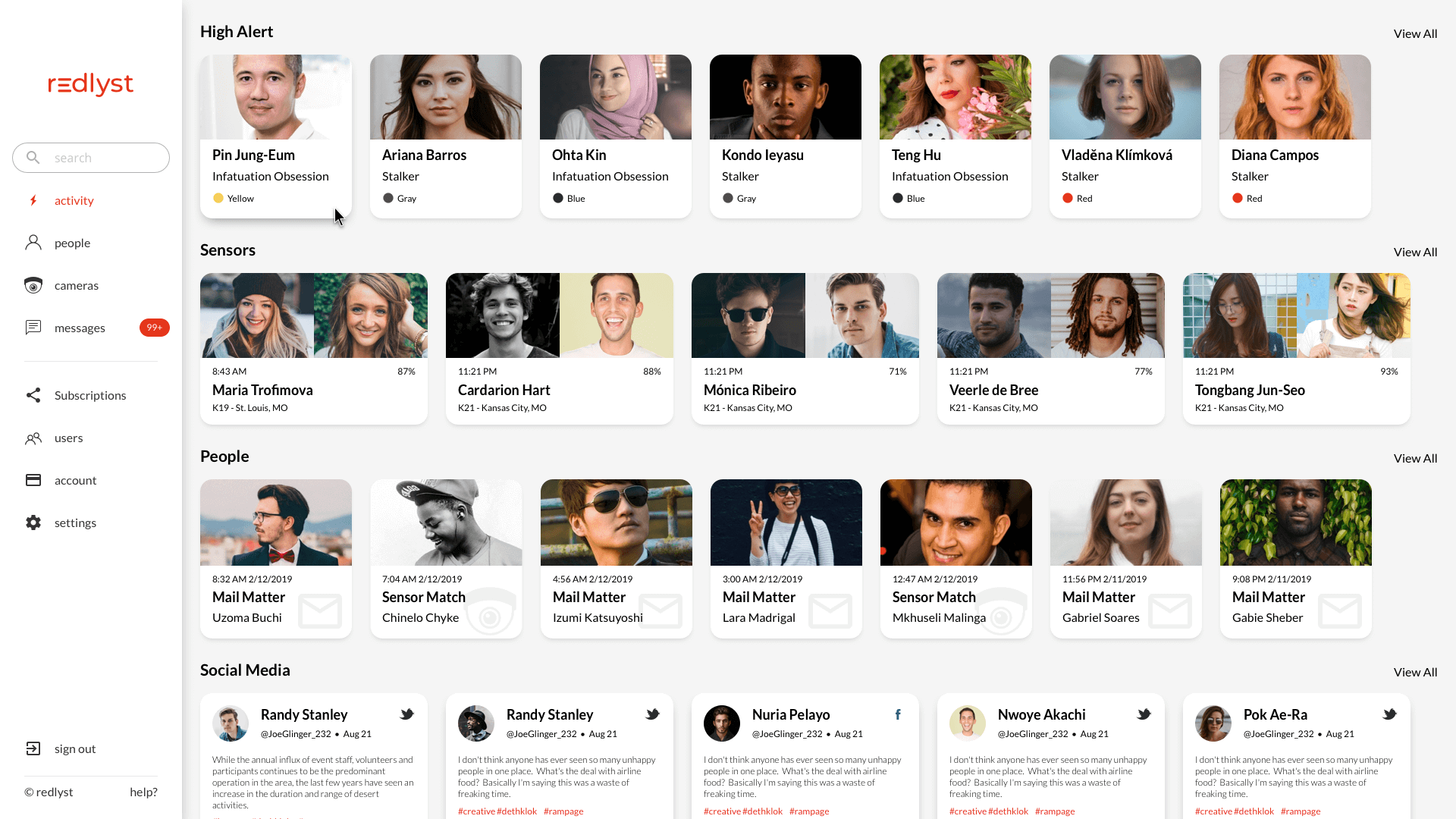 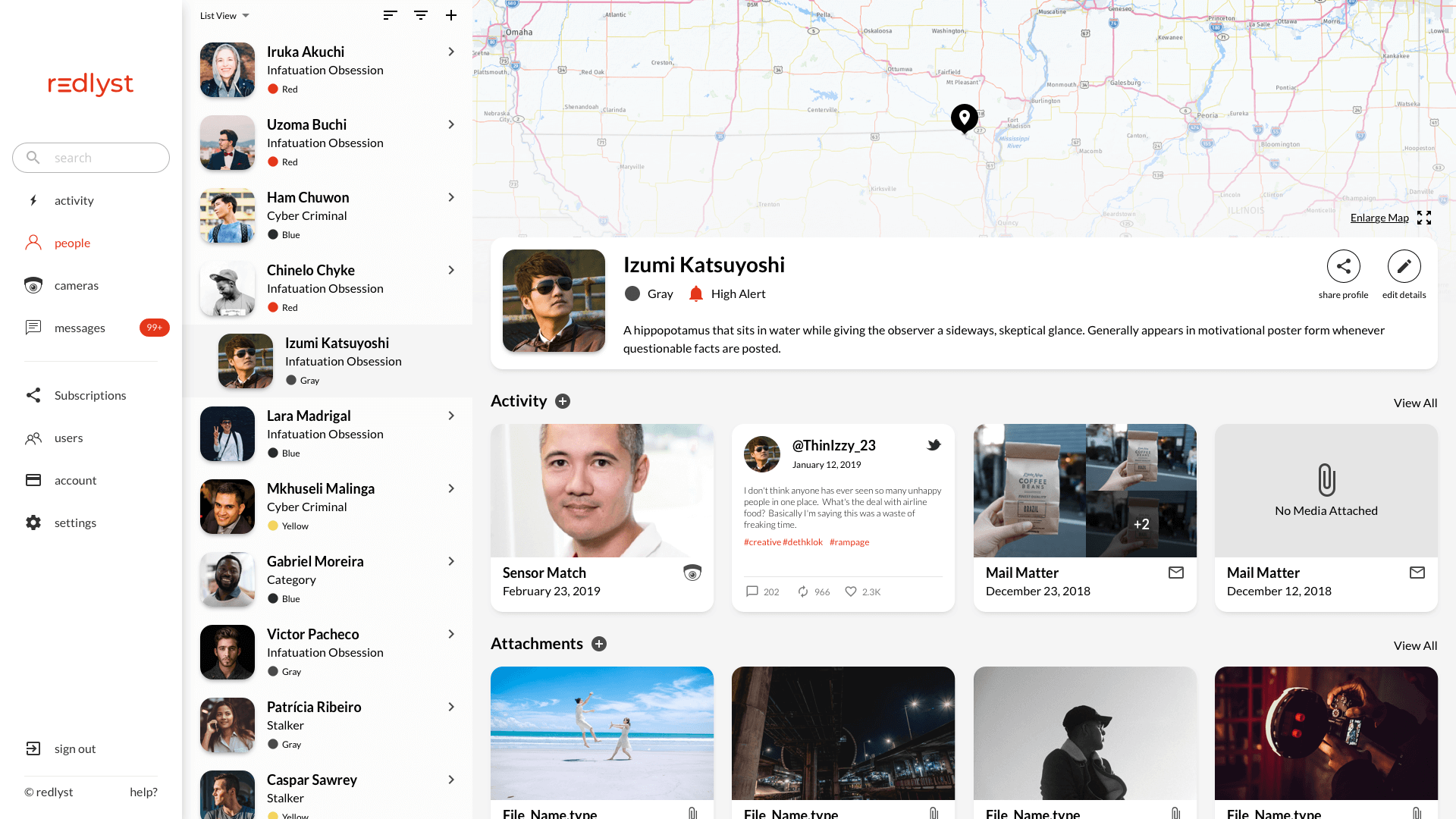 Some major considerations for the designs included emphasizing faces as much as possible. This was needed for facial recognition software but also to help field agents find targets faster. We also wanted to provide just enough information to users because mobile devices make consuming a lot of information very hard. A strength of the web app was it's ability to spread information all throughout the UI.

We also wanted to build trust with the platform by solving real problems. The security teams were veterans in their craft and adopting a whiz-bang app wasn't something they really wanted to do. We had to seal the deal by delivering measurable value and hitting direct pain points in their process. Redlyst needed to deliver the right information to the right hands, at the right time. 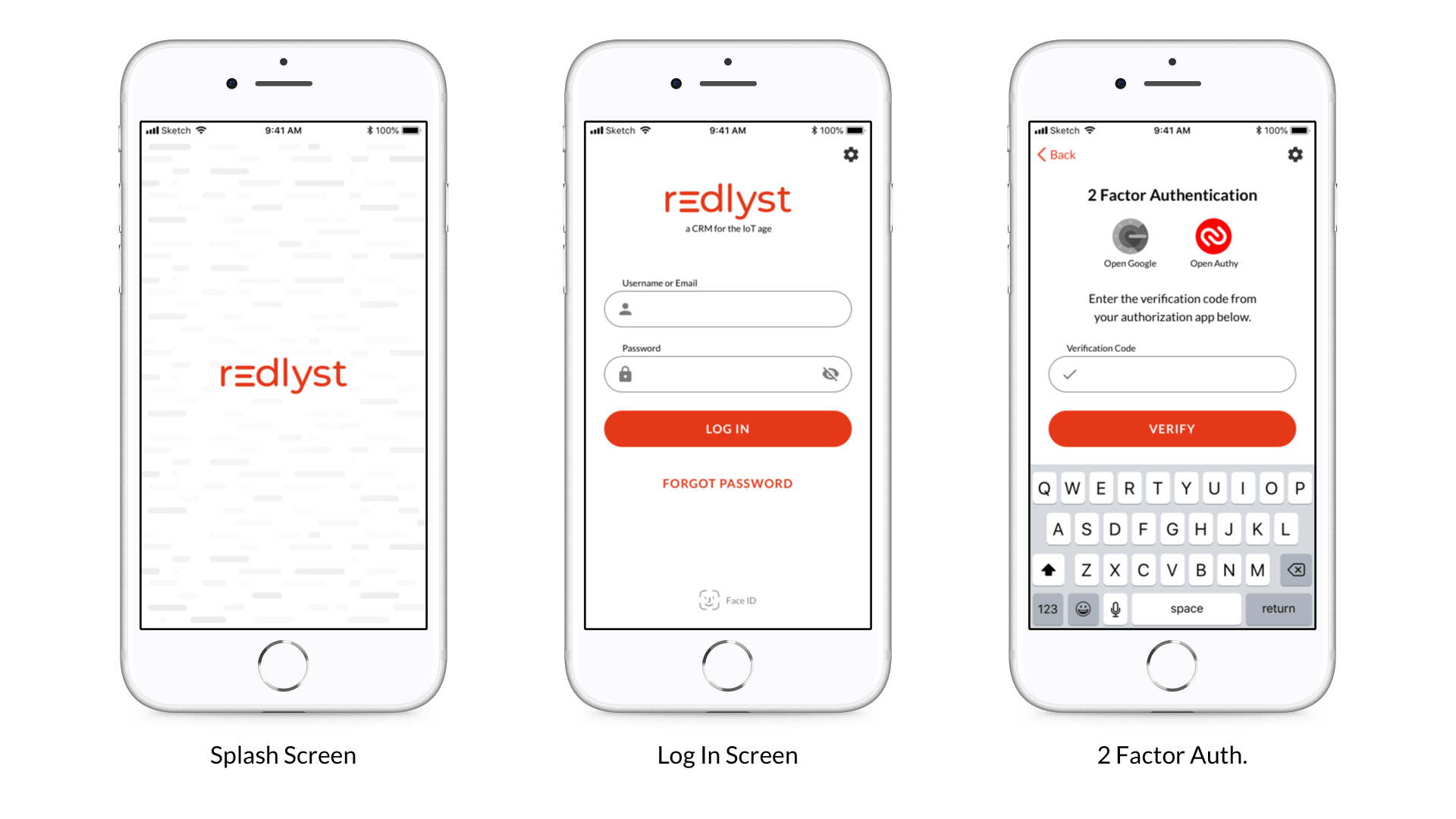 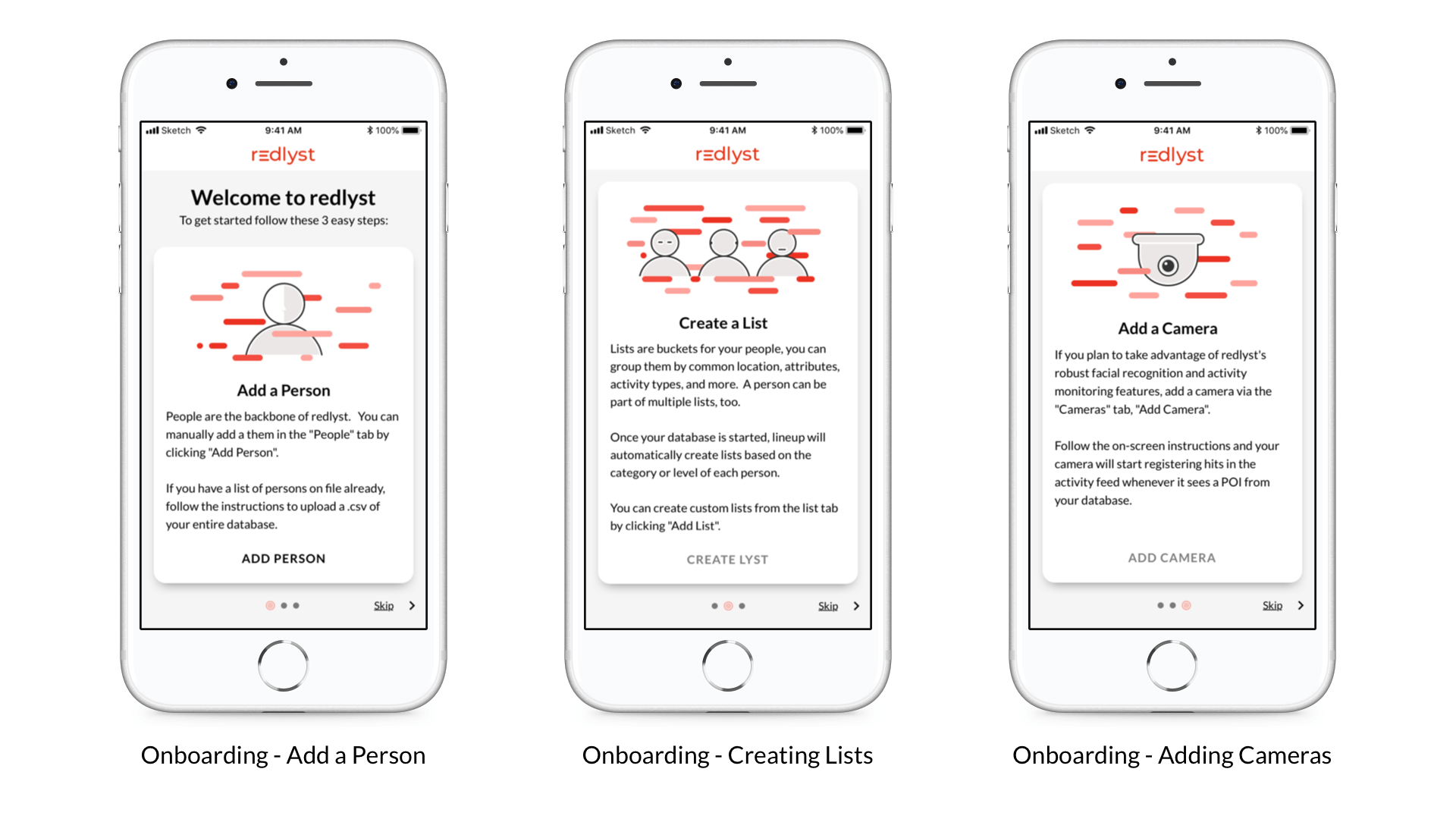 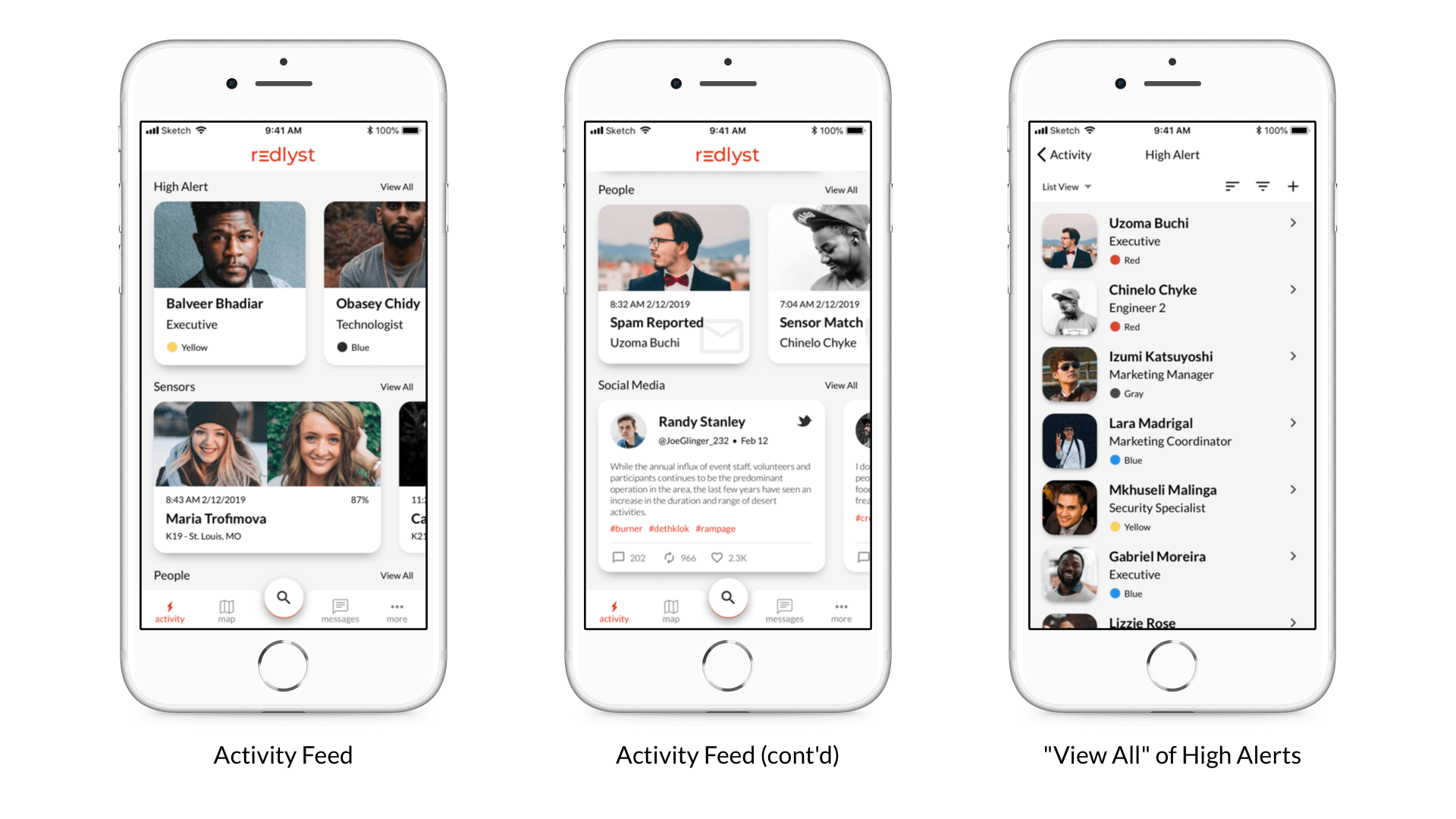 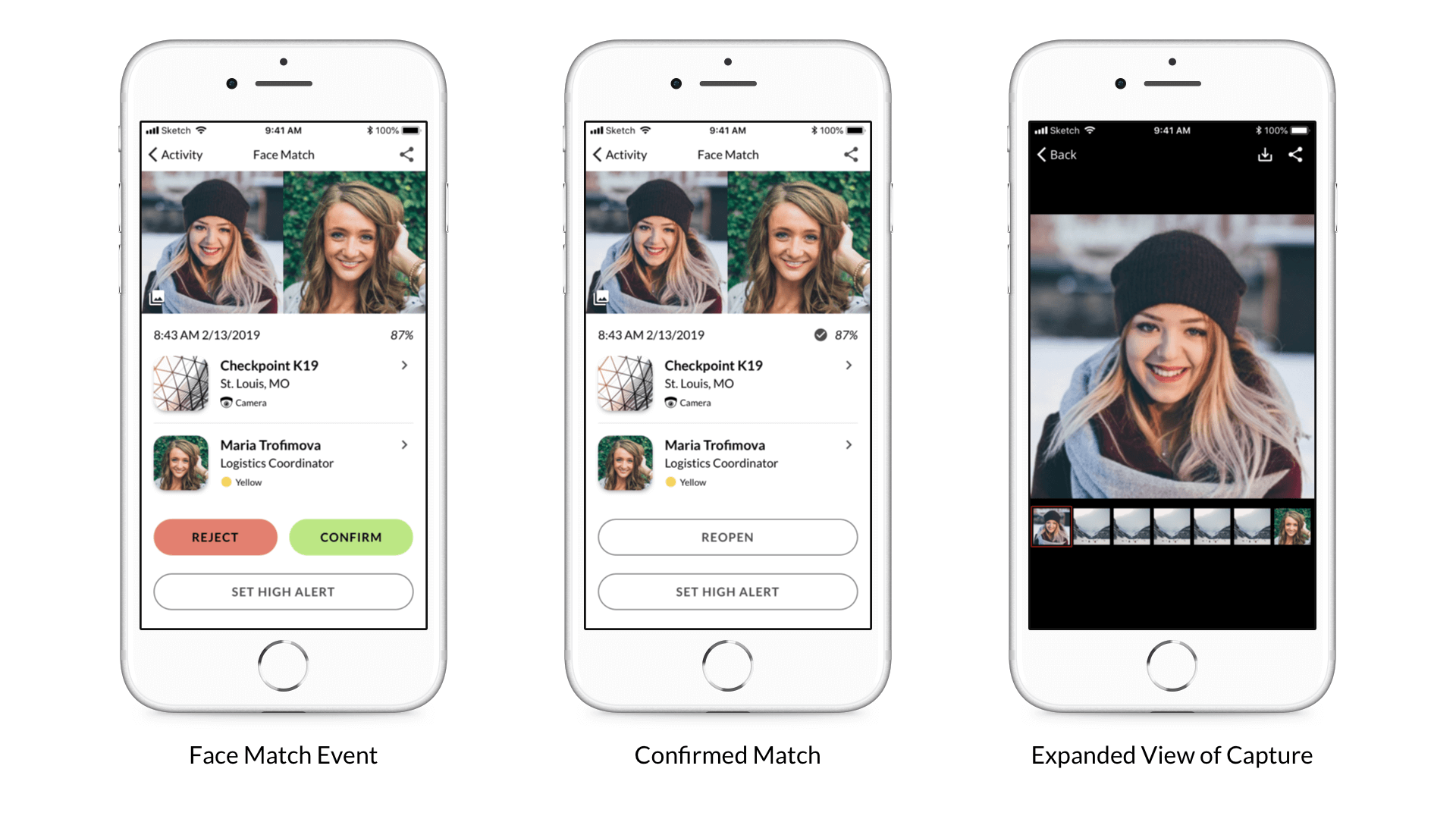 One issue with the app was the "kitchen sink" nature of the features. It was a fancy phone book, a texting app, a facial ID device, a social media feed, a mapping tool, a diary, a sensor management platform, and a marketplace for data. Any one of those priorities would require some care and finesse to do right. Getting one app to rule them all was very challenging and that meant a few features were rushed in their experience.

I tried to leverage progressive disclosure as much as I could, giving users a "taste" of the information and letting them make the choice about how they want to dive deeper. I also shook up the design, showing some information in feed form and that same set of data on a map. Context was a driving force behind the designs which helped improve usability. 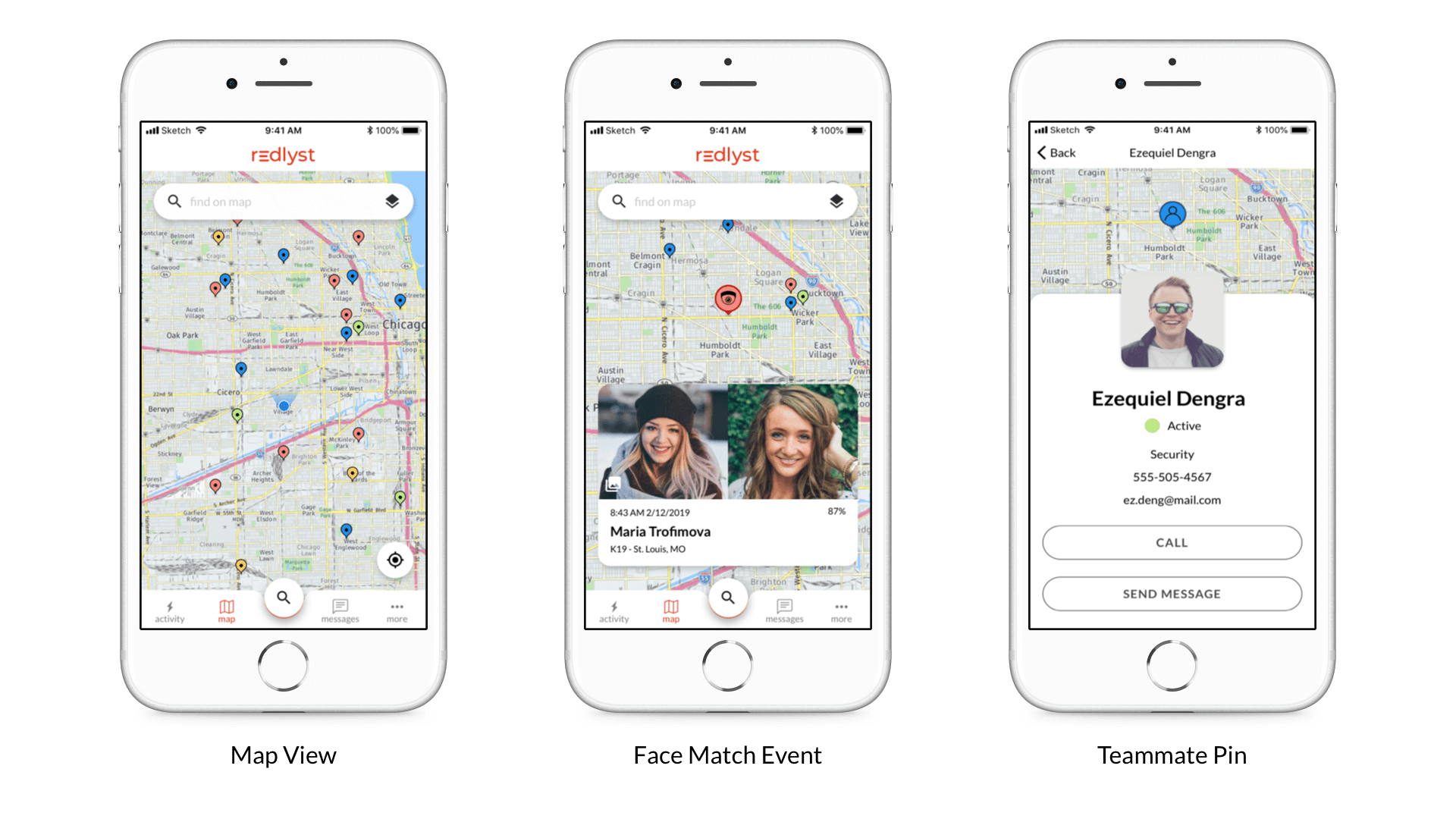 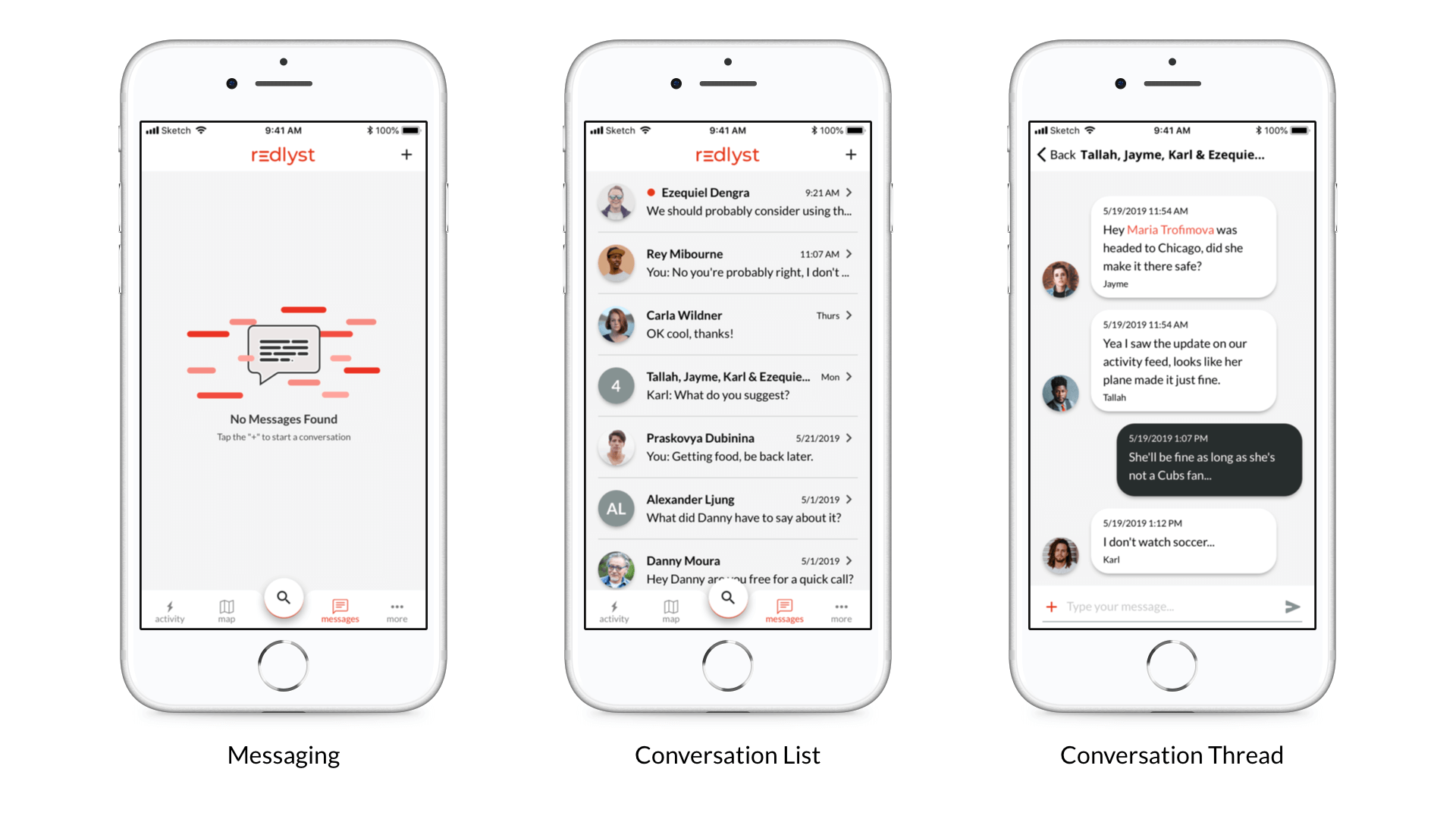 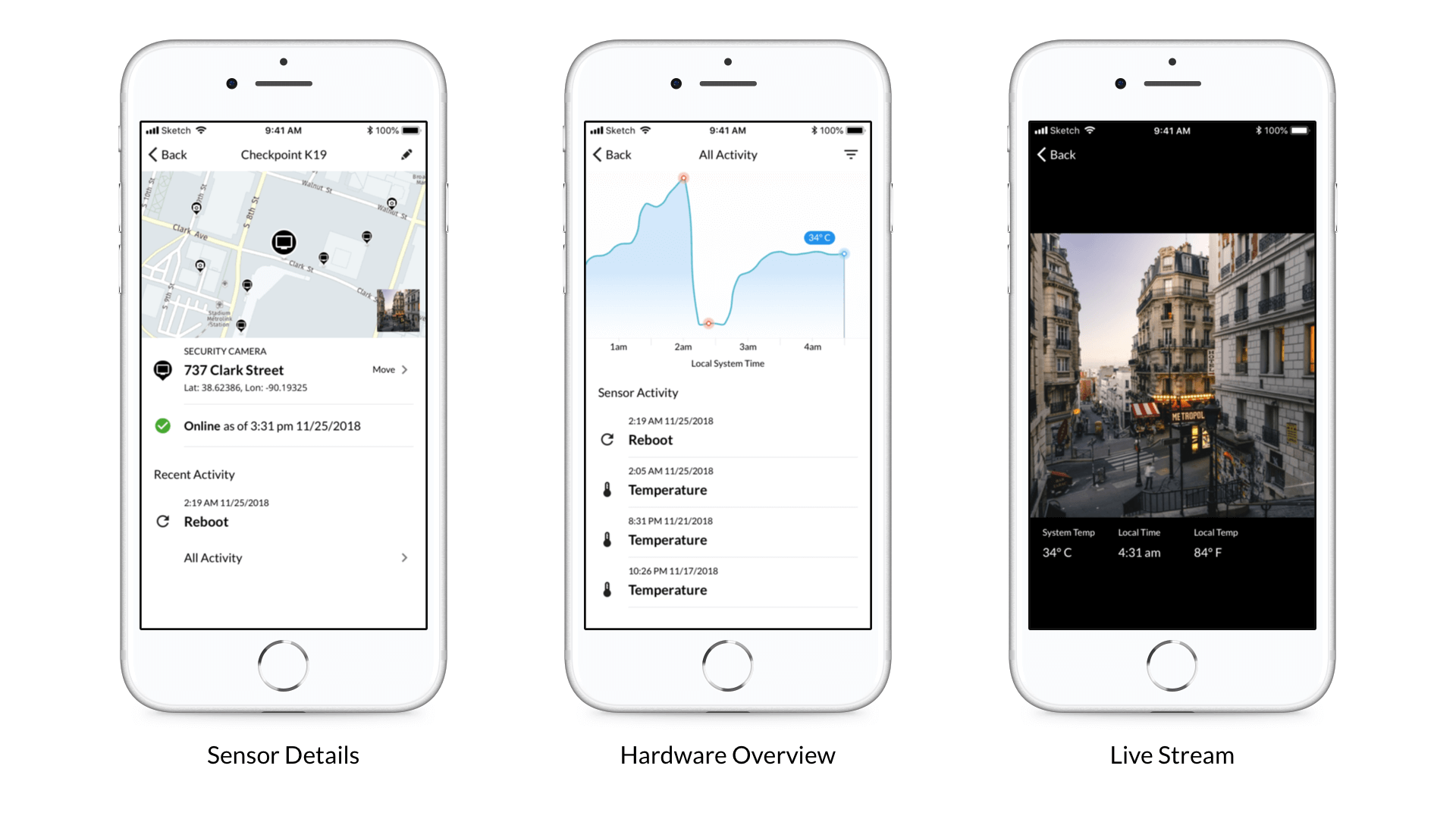 Since data is the new gold and oil, the premise from the company was to enable a marketplace for sharing data. The feature was a bit if a business dream. If you had a list of bad guys or a map of the tunnels under your city you could share those resources with other security teams and make a few bucks. Or the company could curate data sets and sell them to customers.

For the record, my job wasn't to judge the ideas - just push the pixels and make the experience as attractive as possible. 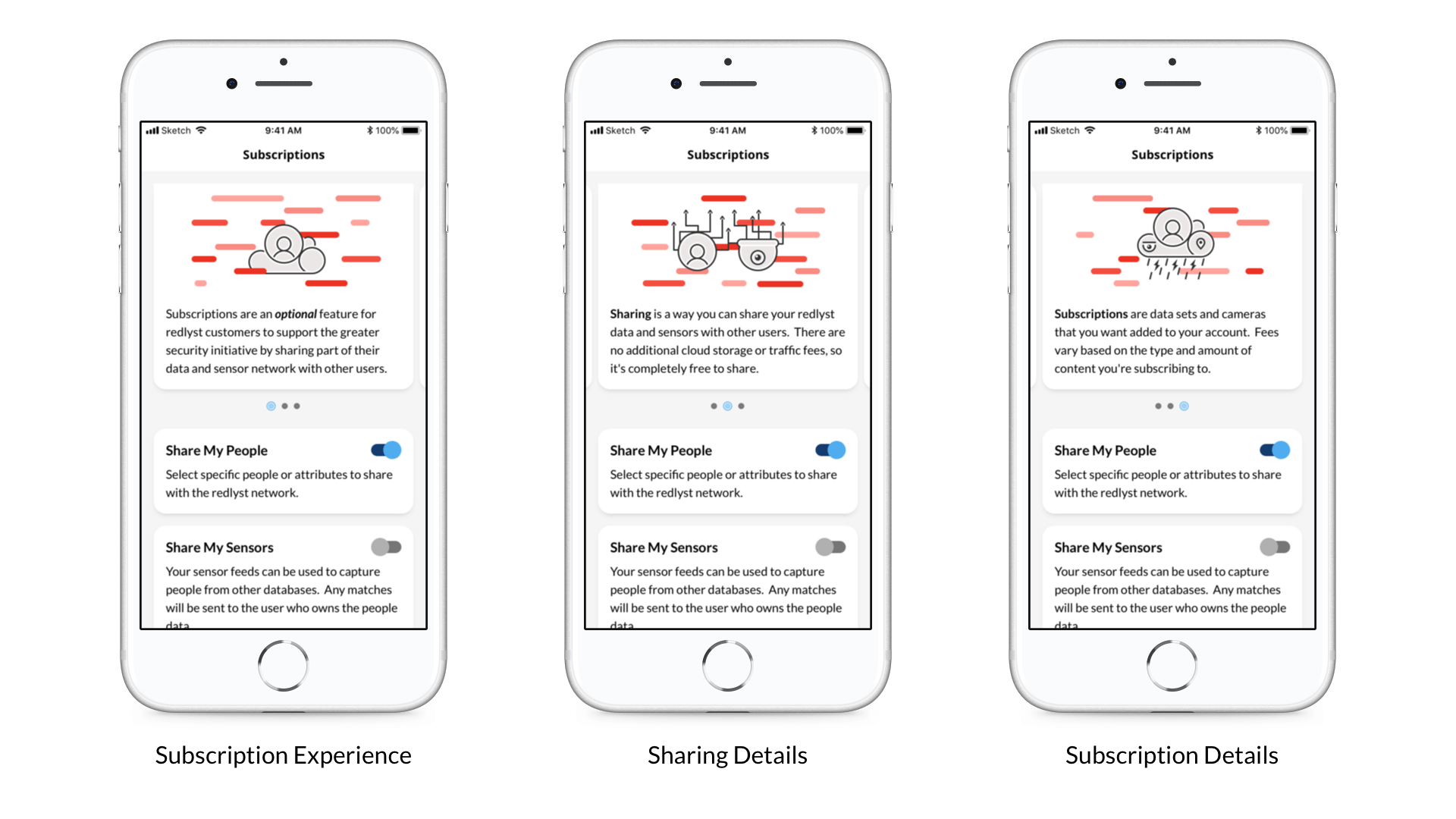 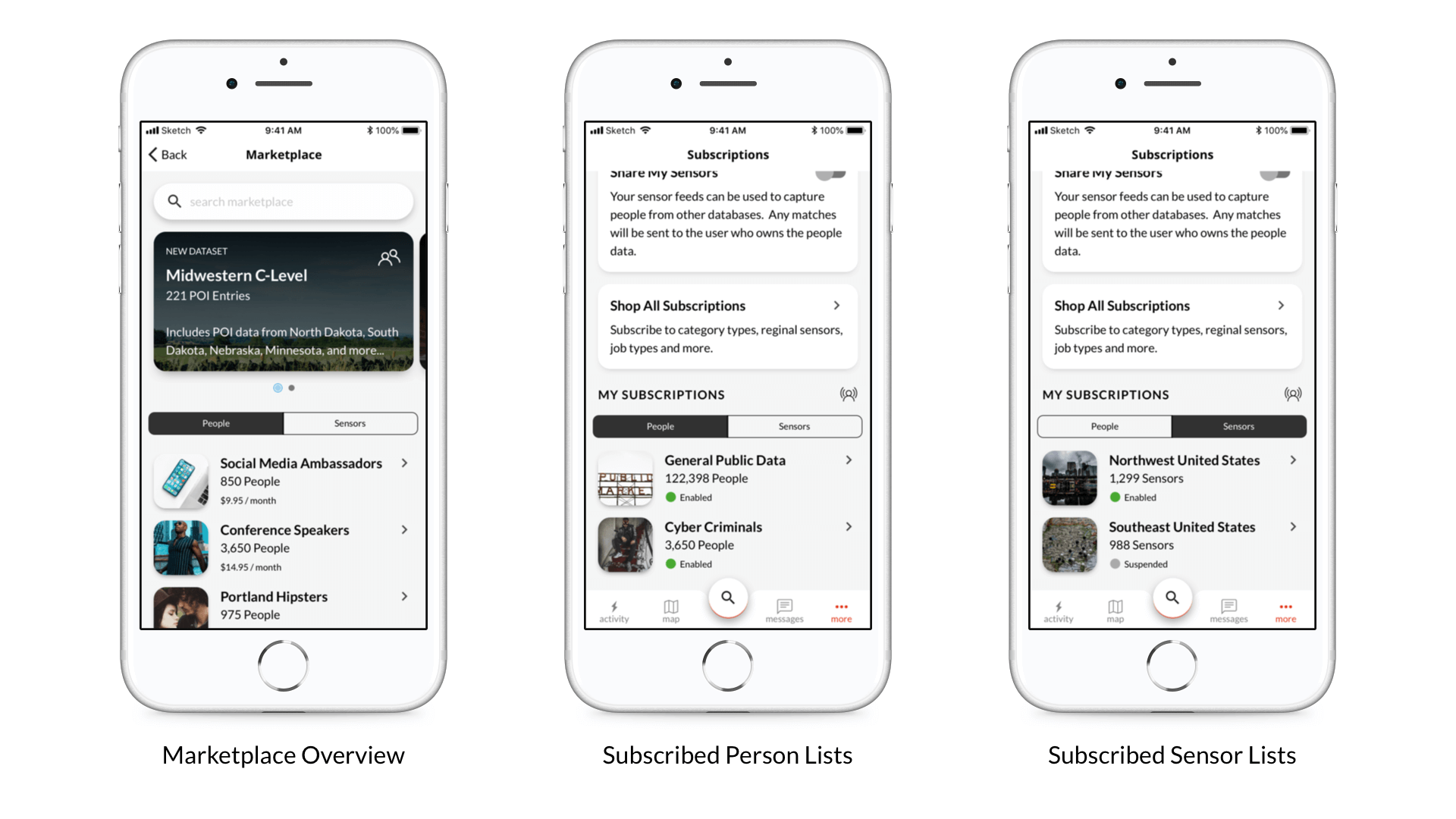 In addition to juggling the many experiences I handled the branding for Redlyst (the company and the software). The market differentiator was to go away from other military-style security apps, so I went with lowercase letters that were rounded and approachable. I also worked on some custom illustrations to use throughout the apps which help communicate some of the core app features. 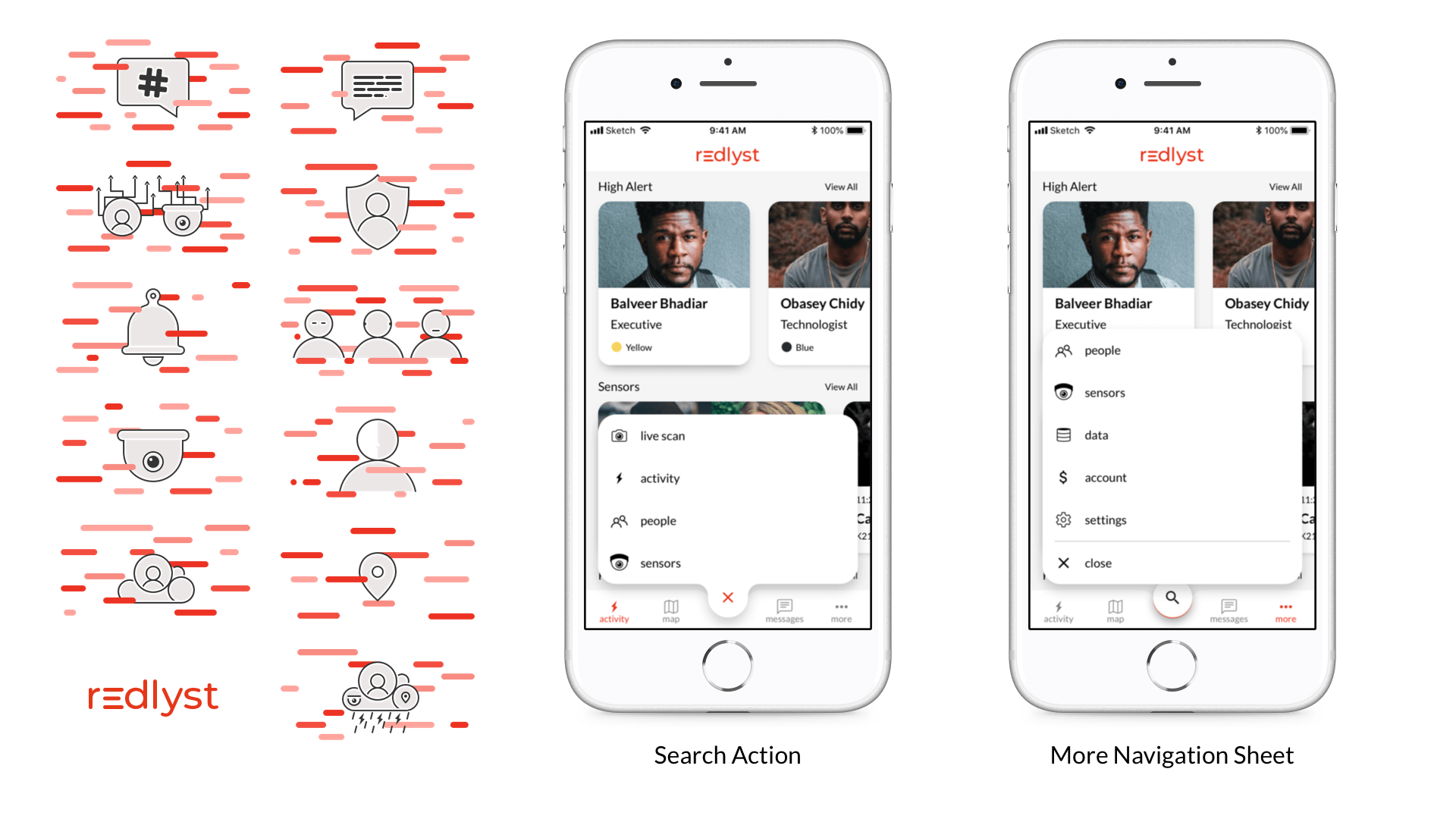 Digitizing the POI data helped make updating records fast and easy - nobody ever had outdated information regarding potential threats. Our facial recognition technology helped add eyes and ears throughout venues to reduce response times. It also improved the efficiency of the command center agents as they could monitor feeds from multiple events simultaneously.

The bonus features like chat and threat levels were also powerful, making communication more effective and surfacing the right information at the right time.